PATTAYA, Paradise for Travelers. A paradise of millions of travelers, who dream to visit her once in a life time or twice. Her fun-packing experiences on the beach resort called "PATTAYA" will remain impressively thousand stocks charming memories as long as she does. Pattaya became renowned as a tourist attraction during the Vietnam War over some decades years ago, when several United States Air Force bases chose to site in Thailand at Sattahip district which located not very far from Pattaya. Thus, American GI's from the base flooded to Pattaya with worthy dollars in theirs, turning the place which had ever been a silent fishing village, being unattractive beach, became a crowded city until present day. It trapped numerous investing developers: large ,medium and small accommodations are kept emerging including many sophisticated night life industries. 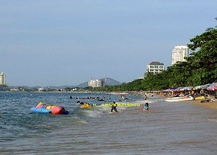 Since then Pattaya has now had a completely new look. Various businesses have been growing in order to meet tourists needs. Today there are supermarkets where people can do their shopping all through the night. One of Pattaya's major attractions is her sexy-sophisticated night entertainments. Small road side bars in the past ,becoming into laser discotheque houses, Euro-thechno pubs, hi class cocktail lounges, international karaoke rooms, air-conditioned massage parlors and extravaganza cabaret show theatres (Al Cazar, Tiffany) and chic therapy: a-go go bars.

Tourist's Attractions in Pattaya & Nearby

Interesting attractions which play major roles in making pattaya more tour worthy comprising Koh Lan, Koh Sak, Koh Pai, Koh Marn Vichai and many more other small islets off Pattaya beach. Her sea water and sandy beach are ideal for swimming, sun-bathing, scuba-diving as well as other water sports.
Jomtien Beach is the most notable of several beaches immediately south of Pattaya. This powder sandy beach is approximately 6 kilometers long and far from the resort just taking a walk. It is the greatest location for water sports enthusiasts and windsurfing. It has become more and more popular for water sports and beach activities because its beach area is largely straight 6 kilometers long and importantly there are no less boat anchored in the sea.

Pratamnak Hill is situated at south Pattaya beach. Its peak is a vantage point to get the best panoramic view of the Pattaya bay as well as the entire Pattaya City.

Nong Nooch Village is about 18 kilometers south of Pattaya. is a beautifully landscaped country resort with orchid nursery, cactus garden and other botanical gardens.There is a cultural center displaying arts, folk dances, traditional ceremonies and martial arts displays. Importantly, there is the elephants show and mini-zoo alike. 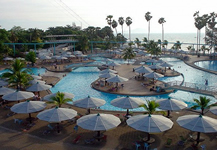 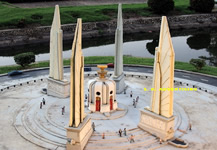 Mini Siam is located on Sukhumvit Road.It is a miniature town with interesting places in Thailand on show, where tourists can view before decision to touch the real places. Workmanship is very skillfully built replicas in Thaialnd as well Muang Boran at Samut Prakarnprovince which is not minature but duplicates the real places just new constructions. 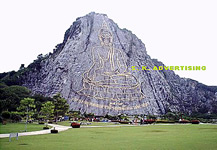 The temple of Yannasangwararam is a temple under King's patronage, being unique appearance for its modern Thai architechture. This temple is popularly mediating course for common men at 06.00 a.m. and 06.00 p.m. The temple is far from Pattaya about 12 kilometers and 3 kilometers from Nong Nooch Village. 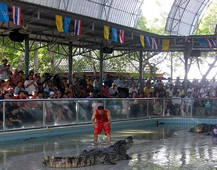 Pattaya Crocodile Farm is a new and wonderful attraction of Pattaya, being very well enjoyment for Thais and foreigners as well.

Elephant Kraal features thrilling and spectacular demonstration of elephants at the daily shows. 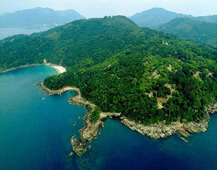 Koh Samet: It is a 15-kilometer east of Rayong province, being an alternative point of Pattaya. Boat services are avaiable all day. The island is part of "National Marine Park" It has a lot of exotic wild life (like monkeys, birds and snakes). Most of the beaches are on the northern and the eastern coasts, but the west ones have steep cliffs and rocks. Mini-bus services from Pattaya daily. Try to contact a travel agency around city for experience there. Overnight accommodations & special packages are available. 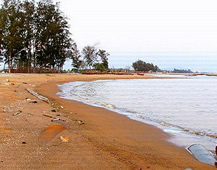 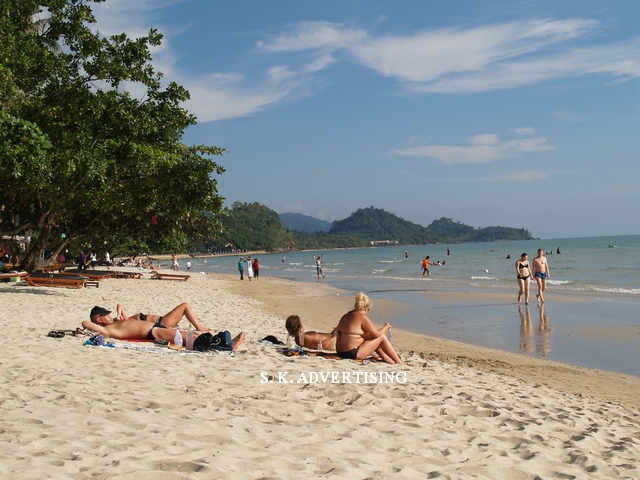 Koh Chang in Trat province is the Kingdom's eastern most province. It is famous for the source of the world's finest rubies and sapphires. And now it is emerging as one of the newest international beach resorts with many unspoiled and fascinating islands. It's very easy to take a bus from Pattaya to Koh Chang. It's time to alter the atmosphere of night entertainmet beach city.