Koh Chang is plenty of many interesting natural tourist's spots around the island such as waterfall and powdery sandy beaches. The lifestyle of villagers is quite tradition which is good for study. Since Koh Chang is not to far to travel and the climate is almost good throughout the year, lots of visitors, both Thais and foreigners. 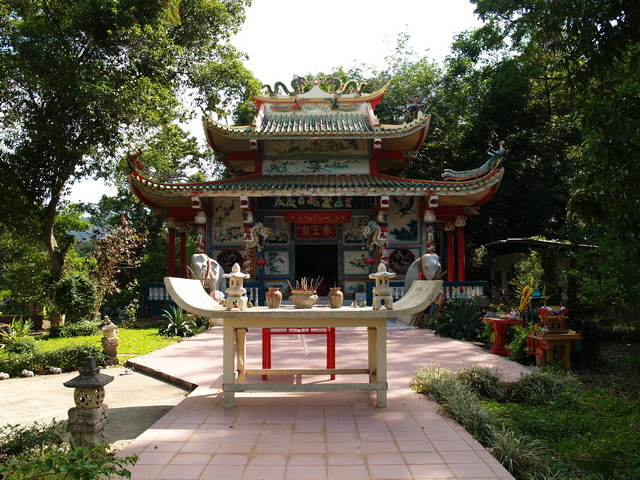 Here are some interesting places on Koh Chang:

The Koh Chang Naval Battle - The area where the battle took place is near Salak Phet bay. It was once a battle field between Thailand and French over the dispute about the eastern territory. On January 17, 1941, Thai Naval force encountered the French Naval one. As a result, 3 Thai battle ships were sunk: The Songkhla, The Chonburi, The Thonbburi ships. Some Thai Navies lost their lives here. Accordingly, that day, each year we hold a ceremony to commemorate the sacrifice of those navies for the Kingdom of Thailand. 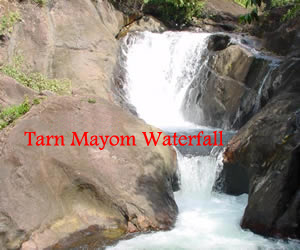 Tarn Mayom Waterfall - The upstream of the cascade is 500 meters far from the National Park office. You can take a walk through a durian orchards to get there. The cascade has three layers. The flowing stream of the waterfall runs through the black granite stones to the cliff. The tropical rain forest makes this area so cool and mist. In the past, the Royal lines of Thailand used to visit here, scripting his names on the rock near the cascade during their visit.For instance, King Rama V came here in 1913, King Rama VI in 1922 and King Rama VII in 1927 as well the Queen of King Rama VII in 1973.

Khlong Plu Waterfall-It is a three-cascading layer. The entrance starts from the Khlong Prao community.

Khlong Nonsi Waterfall -This is a small waterfall, being 3 kilometres far from Baan Dan Mai, or 4 kilometres from the National Park office.

Khlong Nueng Waterfall -This is a fishermen village , being so interesting place because their homes are built in the ocean on the logged-poles. Ridges are built across from one another, catching squids as fishery. There are bungalows, resorts, to stay, restaurants and boards for diving in the village are available. Seeing through the sea bottom to view some beautiful coral reefs is very comfortable.

Baan Salak Phet or Baan Rong Tan -This is the largest community on the island which is in the southern part of it. Around the seashore of Salak Phet bay lies many piers, bungalows, small restaurants one by one. 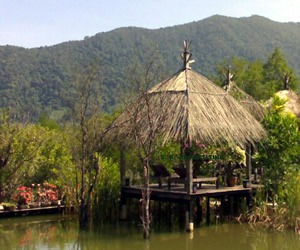 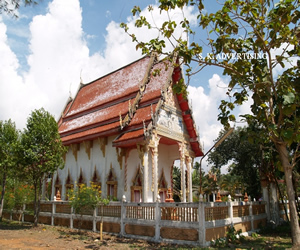 Baan Salak Kok: It is next to Baan Salak Phet. The way to Baan Salak Kok is pretty narrow, but a wider area where the fishermen keep their boats from the wind. There is no beach for swimming. This community is another large fishermen village.They do shrimp farms as their living. This place has only one pier and one temple. The lifestyle of the people here is very interesting. 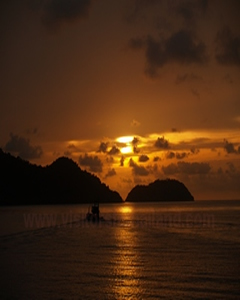 Tan Mayom Pier:It is an old pier which is 45 minutes on boat from Leam Ngob. This is the place where the office of the National Park located. There are two houses only, but visitors can stay here by renting their tents. There is a waterfall mentioned above here, the streaming is very great for swimming. During the fruits season (August to September), they use this pier as a place for transporting fruits to the one another shore. 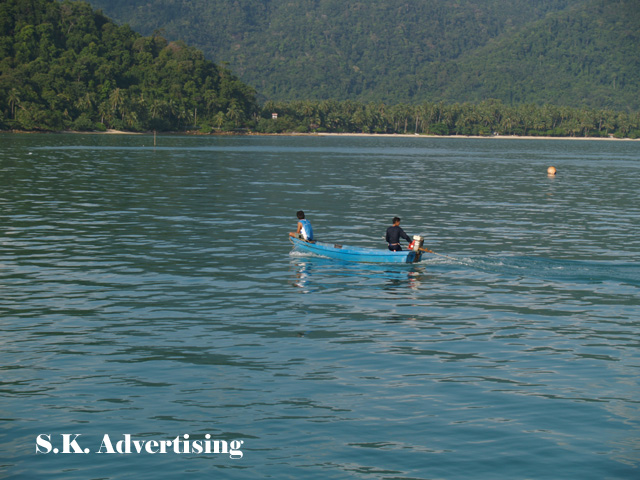 Baan Dan Mai: Dan Mai pier is next to Tan Mayom one. There is a mail-boat service from Leam Ngob to the pier one time daily at 01.00 p.m.The area is surrounded by many orchards that grows rambutan, durian, mangosteen, etc. The local people do the fishery in the hinged floating baskets in the ocean. This place is no recommended for swimming because of stony beach.

Dan Gao Pier:This pier lies up next from Dan Mai pier. The stony beach here is not good for swimming but for greatest fishing. Behind the community there is a source of fresh water. Dan Gao is used as a gateway to other beaches.

Sapparod Bay (Pineapple Bay): The bay is one pier next from Dan Gao pier. Ferries starts from Ao Thammachart and stops at Koh Chang. Sapparod bay is a stony beach which is not good for swimming and very deep water. 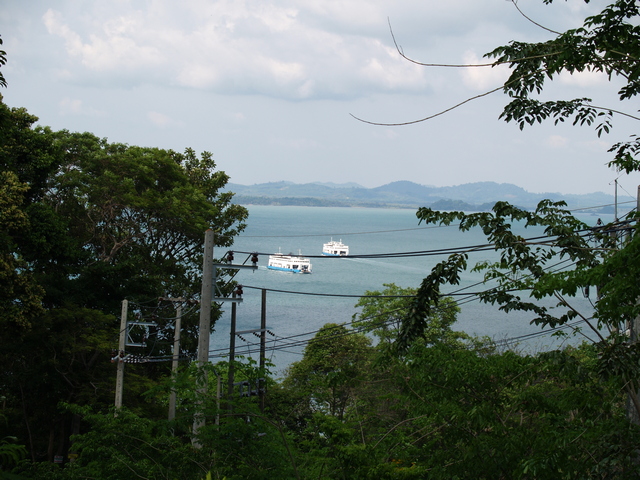 The fishermen also use this bay for knotting their boats. This is like Na Thon of Koh Samui but so much smaller. Here are pick-up services for tourists to reach your destinations around island, being the distance 17 kilometers from Sapparod bay to Kai Bae beach. Tourists can get off wherever resorts just telling the driver, the name of the accommodations you need. 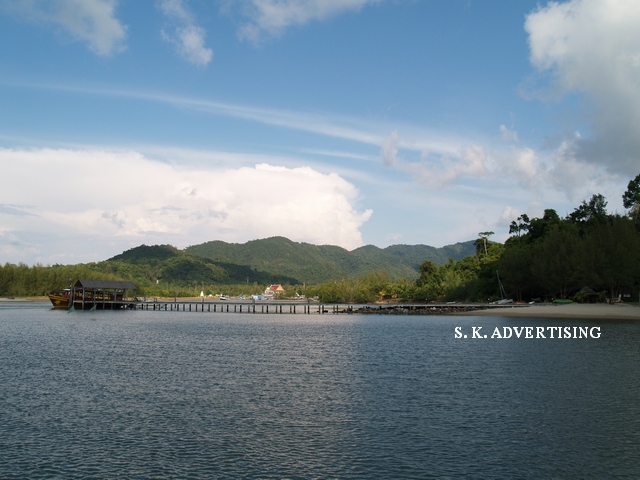 Khlong Son Bay: It is located in the northern part of Koh Chang. The beautiful white sandy beach line side by sides dotting the greenery trees. Khlong Son bay has beach on two sides. It is a good place for snorkeling to view the corals underwater world. The beach is so clear, clean and long, stretching 400 meters long. Here is safe for swimming because the beach is step by step deeper, and not crowded.

Long Beach: The beach is so long as its name. When the tide is low, you can play football as a full team down there. This beach is safe for swimming. On the right side of the beach is near the hill where you can dive to see the beautiful corals. Taking a boat is the only way to get here.The surrounding area is plenty of coconut trees and tropical rain forests. 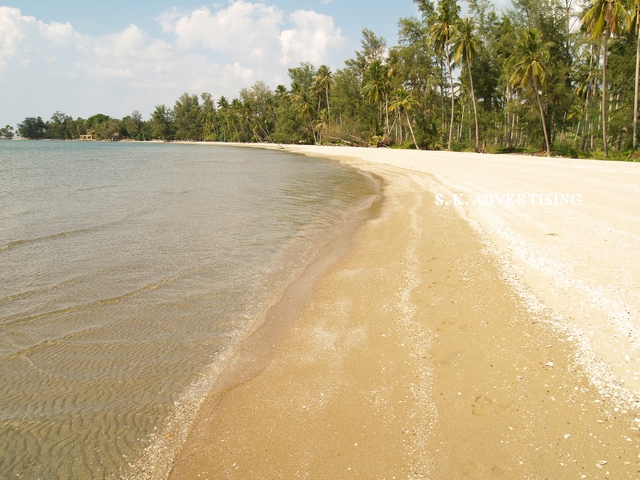